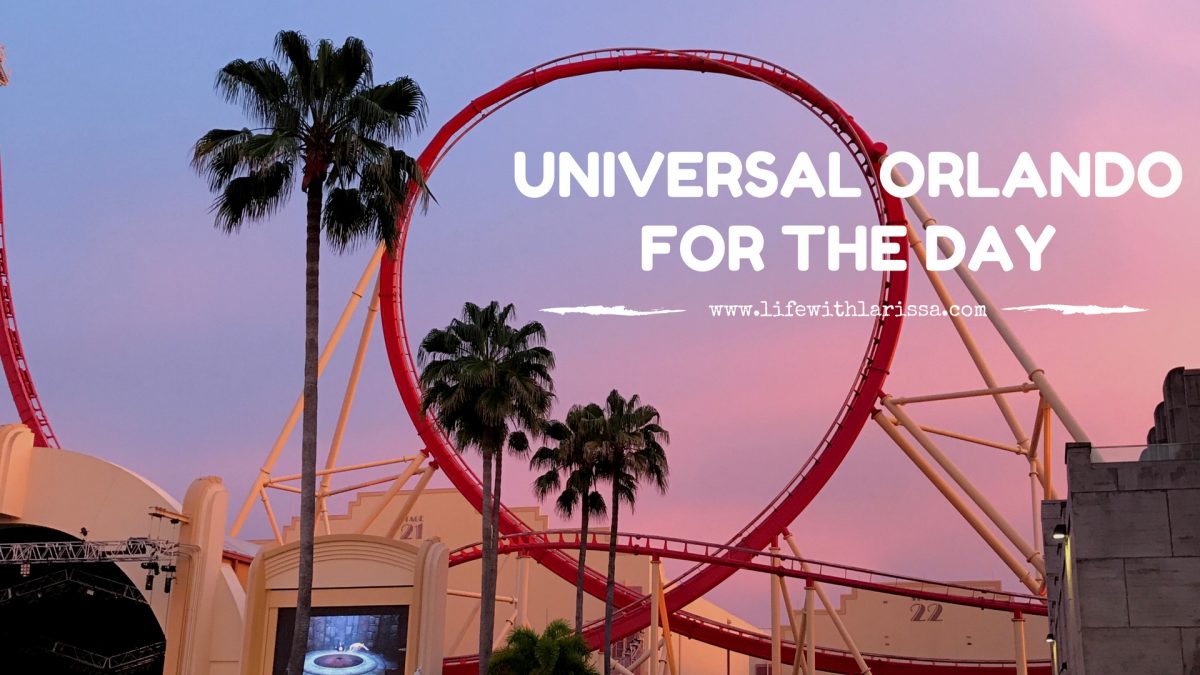 Welcome back to Life with Larissa! In the second part of the two-part series of our Florida trip, we focus on our trip to Universal! You can read about our trip to Disney the previous day here. So the day after Disney, my sister, Brit, and I headed to Universal Orlando with our cousin, JoJo, and her co-worker, Ashton. We had the park-to-park admission tickets, so we decided to tackle Islands of Adventure first. As you know, I’m not a roller coaster fan, so I hung out by my lonesome a couple of times while they all decided to ride the more thrilling rides. The first ride they rode was the Hulk. JoJo and Ashton tried to convince me to go on it, but after Ashton described it as ‘shooting us out’, I immediately declined.

After they got off the ride, we studied the map for a little bit, and decided to follow the course and hit the rides that seemed interesting to us. It was supposed to rain later that day, so we decided to skip the water rides and come back later, if we had time. Especially since we’d already be wet from the rain.

We weaved in and out of the crowds of people, slipping into lines and enjoying the air conditioned rooms while we waited for some rides. We used the single rider line at every ride that offered it, and it was definitely a time-saver. One of the longest waits we had to endure [that didn’t have a single rider line] was the Skull Island: Reign of Kong. There were so many twists and turns for that line, it was disheartening realizing we weren’t even close to the front with each turn. They did have some entertainment throughout the line though, which really hyped up the ride! There were even people hiding in the walls, and jumping out at people unexpectedly. You’ll know when to expect that, because you’ll hear people screaming [I was one of those that alerted the people behind me, by screaming of course]! The ride was pretty cool, but I wouldn’t wait in that long of a line to ride it again. I personally didn’t think it was worth the wait.

TIP: If you’re trying to maximize your time at Universal, see if the ride has a single rider line. If they do, use it. You might not be able to sit with your party, but you usually do walk right onto the ride, or it’s a minimal wait.

As we progressed through the park, we finally reached Hogsmeade and Hogwarts. We rode the Hogwarts ride first. For this ride, there are free lockers [up to 1.5 hours I believe] available to store your belongings, because you aren’t allowed to bring anything with you on the ride. The ride actually makes you feel like you’re flying through the grounds of the school, and experiencing what Harry and his friends went through in the books and movies!

After the ride, we took some time to explore Hogsmeade. Of course we had to have some Butterbeer. I had previously sampled the original, and that was a little too sweet for me. This time around we all decided to go with frozen Butterbeer, and I would highly recommend it! Since it was a really hot day, it definitely cooled us down a little and it wasn’t as sweet as the non-frozen. There are multiple locations in both parks for purchasing Butterbeer – just in case people buy the one park ticket, they’ll still be able to experience the sweet goodness!

As we were sipping our delicious drinks, we noticed a young wizard waving his wand, and making the chocolate frog in the display case of Honeydukes croak! There are areas spanning Harry Potter World where [if you purchase a wand from Ollivander’s], you stand on a certain spot, wave your wand in a specific direction, and something happens! It’s pretty neat to see!

After we ate lunch at Margaritaville, we headed over to the other park, Universal Studios Florida. We wanted to get in as much as possible as the day began to close around us. Our first stop was Shrek 4-D. We didn’t have to wait too long before we got to go on an adventure with Shrek, Donkey, Fiona, and all their friends! After, we made our way through the park, hitting rides that had single rider lines, or that didn’t have too long of a wait time.

We definitely made time to make it over to Diagon Alley, to explore the other part of Harry Potter World. Here, you’ll find Ollivander’s, The Leaky Cauldron, and of course, Gringotts! I recommend taking the time to go and explore each shop, especially if you’re a Harry Potter fan. Being immersed in the Harry Potter world is a truly amazing experience! We took the single rider line for Gringotts, and we were on the ride in no time flat! There’s one drop that freaks me out, but other than that, I can handle this roller coaster pretty well!

TIP: The bad thing about taking the single rider line is that it bypasses a lot of the detail and decoration/story for each ride, so if that’s important to you and your party, you may want to consider waiting in the main line.

We rode a few more rides after that, then we made our way to the City Walk as the park was closing down. We were all craving something sweet, so we began to scour the buildings for dessert places, when Ashton’s eyes fell upon the Toothsome Chocolate Emporium & Savory Feast Kitchen. We figured we would splurge and indulge ourselves, so we headed over there! Apparently it was the place to be, as there were a lot of people there! There were people eating, but most people were in line for the decadent desserts. They have milkshakes, sundaes, puddings, cakes, and pies available to satisfy that sweet tooth. My cousin and I split a Brookies Crookies & Cream Sundae, Brit got the same sundae for herself, and Ashton got a Heavenly Hazelnut Milkshake. It was definitely the right move to end the night!

TIP: You receive a pretty big portion, so I would recommend splitting a dessert with someone, unless you’re planning to take some home and save it for later! JoJo and I were able to finish ours; Brit wasn’t able to finish hers; and Ashton saved the rest of his milkshake for later!

We had an amazing time at Universal, and I know I’ll be back someday! What about you? Have you been to Universal Orlando? What was your favorite part? Let me know in the comments!

16 thoughts on “Universal Orlando for the Day”