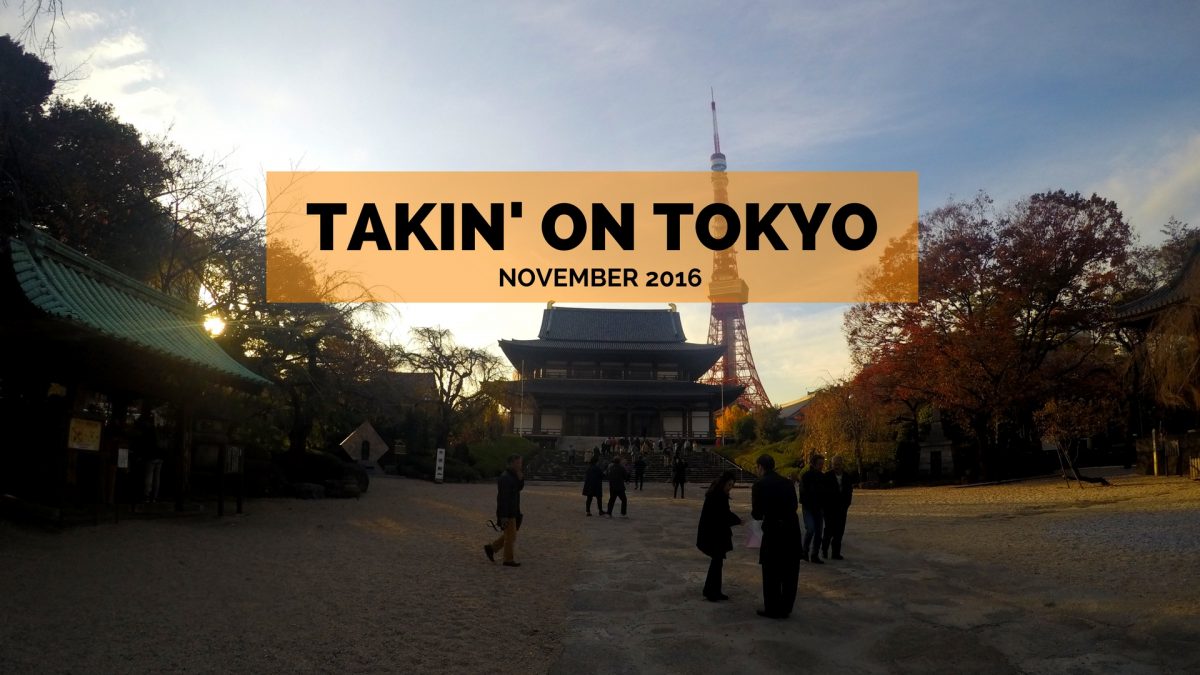 I couldn’t believe when the plane tickets to Japan were purchased. It was so surreal to me that I was actually flying across the world to go to my first Asian country. My travel partners – Vika, a longtime friend since middle school, and her boyfriend, Telal – were also so excited as well. We were heading to Tokyo, Osaka, and Kyoto!

Our journey started from the Newark International Airport in New Jersey, United States. We flew United from Newark to Hong Kong. The flight was long, approximately 16 hours. Thankfully, we were entertained with movies, games, and meals. And of course, sleep. I believe I watched about 3-4  movies on that flight. When we landed in Hong Kong, we had about a 4.5 hour layover. The wait wasn’t too bad, and we were on the next plane before we knew it. This flight was only four hours, and I enjoyed breakfast and a movie. We landed in Tokyo around 5:15-5:30 Monday morning. We were tired, but also determined not to nap so we didn’t waste an entire day.

After landing in Tokyo, we collected our bags and made it through immigration. While we were at the airport, we decided to figure out the train and metro situation. We bought a train pass and a metro pass. We then found our way to the Itabashi Station, where we were staying using Airbnb.

Tip: Make sure to buy your Japan Rail Pass before you travel to Japan. You’ll save a lot of money, time, and headache. Also, if you have the Rail Pass, you don’t have to buy a metro pass.

We were able to check in early, and our host was so gracious to meet us at the metro station. Our host gave us a tour of the apartment, and we placed a deposit down to use the host’s pocket wifi. I would highly recommend using a pocket wifi. It saved us numerous times! Anyway, we dropped off our bags, then headed out to meet Vika’s friend and former college roommate, Kaori at the Ikebukuro Station.

We ate some Udon noodles at the station and of course got our coffee fix, then headed out to do some sightseeing. First, we headed over to the Tokyo Tower. It’s definitely visible from a distance, and the height is simply impressive. As we were walking up, we were delighted to see Christmas decorations.

We headed up to the observation level and took in the impressive views. We could see so far, and even appreciated some rooftop gardens. Everyone was enjoying the views, and there was even some spots on the floor where you could look down. That was pretty cool!

After the Tokyo Tower, we headed over to Zojojo Temple. On our way over, we saw one of the MariCar tour groups drive past us! I got so excited because I knew we would be doing a similar tour the following morning. We continued on to the temple – and we actually had the opportunity to witness an authentic Japanese ceremony conducted for two young daughters of a family. The entire family was dressed up and the two girls were in beautiful kimonos. Karoi was telling us how this is a traditional ceremony for girls of their age. I thought it was pretty cool that people were able to respectfully watch this special ceremony.

We ended the day at the Asakusa District. I highly recommend visiting this district if you ever find yourself in Tokyo. Here, you will find the tasty treats, a beautiful temple and shrine, and just the beauty of the Japanese culture. This may honestly be my favorite district of the ones that we visited. That also may have to do with the bean paste pastries that we sampled. They changed my life! Tuesday morning, Vika and I woke up and made our way to the MariCar shop. I was literally so excited to go on this tour, and I would definitely do it again. Check out my MariCar post to read about my full experience, and to see more pictures!

After we spent the morning “speeding” the streets of downtown Tokyo in our karts, we headed over to the Shibuya District. We heard the shopping there was amazing, so we decided to check it out for ourselves. There were so many different shops and restaurants to choose from. After we spent some time looking around, we parted ways. I headed over one stop to see if I could find a temple. I didn’t find the temple – but I did find two new friends.

I ended up checking out shops, and for some reason tried to find the Kawaii Monster Cafe. Of course, when I went they were closed, and didn’t open for another 30 minutes. I met Lauren and Mackenzie, who were trying to go to the cafe as well. Since we had to wait, they invited me to go with them  to Brooklyn Ribbon Fries. We ate fries and drank ginger drinks – I had ginger ale, made with real ginger! Tasty! When we made it back to the cafe, it was just opening for dinner. There wasn’t a lot of people – so I would recommend going after 7:00pm to get a more exciting experience. Apparently Thursday nights are the time to be there, so if you’re able to plan it that way – I would do that! The menu has so many different fun options – for food and drinks! You do have to pay an entrance fee, as well as purchase a food and drink item.

I met up with Vika afterwards, and we headed to Ginza. We ended up meeting with another one of her former college classmates, Taku. He brought us to this delicious restaurant where we had to cook our own meat. We had decided to share one order, but it was so good that we ended up ordering more. For drinks, we decided on plum wine, and it was just as delicious!

On Thursday, we headed to Kyoto for the day – but that will be in the post with Osaka, so stay tuned!

We returned to Tokyo Thursday evening, and I was so tired. I stayed home while Telal and Vika went out. I worked on some homework and group assignments I had due the upcoming week, and ended up falling asleep.

Friday, our last full day, was not exciting on my part at all. I was starting to stress about everything I had to do when I got back home, so I started my day with homework. I worked on assignments and PowerPoints before I headed out for the day. I found myself at various stations trying to see what last minute shopping I could get done. I didn’t really accomplish much before I met up with Vika. We went to Shibuya and we got some more shopping done. When we were done, we went back to the apartment, dropped off our purchases, and ate a very late dinner.

We checked out of our Airbnb around 9:00am in the morning. We grabbed our suitcases and headed to the metro. We booked reservations for the train to the airport, and met Taku at the airport. Since it was our last hoorah in Tokyo, we ate at a sushi restaurant. It was so good! There was wasabi in each piece, and I ate it! If you know me at all, you’ll know that I do NOT do spicy food at all, so I was genuinely surprised to see that I was able to finish my entire plate. I also tried sea urchin for the first time. That was a very interesting texture.

I’m not going to tell you that I know all the best spots and secret hideouts – because I don’t. I definitely did not spend enough time in any of the cities to claim to know any top spots. I do know that Tokyo is a great city to try delicious food, experience great people watching, and have the opportunity to tour the city in a new and unique way. I do know Tokyo has something for everyone, and I definitely think you should go if you have the chance! Have you ever been to Tokyo? Would you consider going? Let me know in the comments!