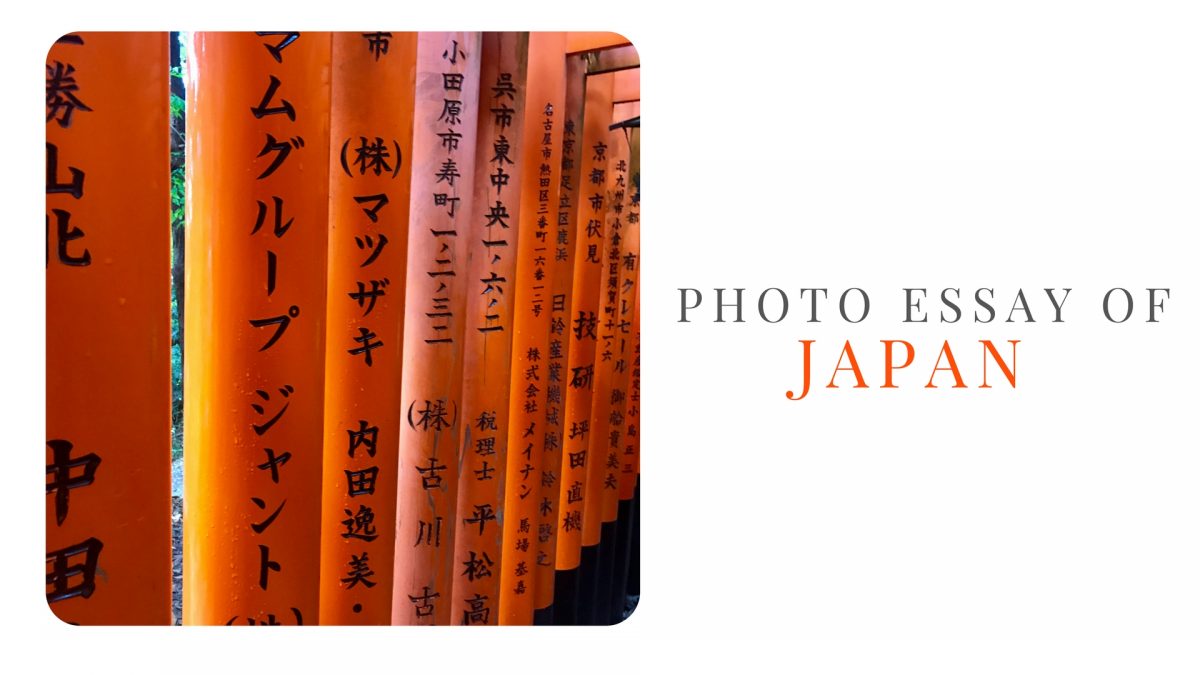 Remember when I informed you guys that I was going to Japan? Well, it happened over Thanksgiving break! It was my first time visiting an Asian country, so I was a little nervous and anxious about what to expect. I didn’t speak or read the language. I did give Duolingo a try, but it didn’t help me out too much.  Turns out though, I had nothing to worry about. The trip went pretty smoothly, and we only got lost a handful of times! I have so many stories from our trip, but to kick off my Japan posts, I put together a photo essay of Japan to share some of my favorite pictures!

Zozoji Temple and Tokyo Tower– While we were at the temple, a family was holding a ceremony for their two young daughters. Everyone was dressed up and the daughters were wearing kimonos. It was pretty neat to be able to see!

Asakusa Shrine – The Asakusa District may arguably be my favorite. Here, you’ll find this stunning shrine which is one of the most famous Shinto shrines in all of Tokyo. This shrine stands to honor the three men who founded the Sensō-ji Temple.

Sensō-ji Temple – Right next door to the Asakusa Shrine, you’ll find the Sensō-ji Temple. You’re able to go in and see the intricate details that make up the temple. People still go there for religious reasons, and no photographs are supposed to be taken during any ceremonies.

MariCar Tour – Vika and I went on a MariCar Tour, and it was honestly one of the best tours I’ve ever been to. It was so much to actually pretend like I was part of the Mario Kart game, as that was a large part of my childhood, and I still play it to this day! Stay tuned for a blog post specifically about our experience!

Fushimi Inari Shrine – Seeing this in person was so surreal! I didn’t realize how long the shrine actually went. We only saw a portion, and there are actually differing heights of these structures. I didn’t know that either!

The Arashiyama Bamboo Forest – Just like the Fushimi Inari Shrine, the Bamboo Forest went on a lot longer than we originally thought. Due to time constraints, we only saw a portion, but it was so cool. When the wind would blow, the bamboo would sway and bend, some trees almost touching the ground, and none of them would break! It was so cool to see in person!

Sogenchi Garden – We actually almost missed this incredible garden! We had just finished visiting the Bamboo Forest, and we passed the sign for this United Nations World Heritage Site. Of course we had to stop to see what it was about, and I’m BEYOND happy we did. The beauty this garden had to offer was truly breathtaking! The richness of the fall colors were stunning!

Osaka Castle – Before entering the Osaka Castle, we had the opportunity to take a picture as Samurai warriors, so of course we did! Afterwards, we walked through the Osaka Castle, which is now turned into a museum for people to learn of its history. This was the first museum that I’ve ever been to that had holograms to help depict what happened in the past.

Osaka Castle – This museum you have to start at the top and work your way down. We weren’t disappointed when we arrived at the top level and saw this view. Of course in the past it was to aid in spotting oncoming enemies.

Noodle Pancakes – To say I ate a lot of noodles during my time in Japan would be an understatement. You can find many different variations of noodle dishes throughout the country, even noodle pancakes. They were made right in front of us, and it was definitely an interesting and tasty meal!

The Famous Dōtonbori Sign – We had no idea about this sign actually, but the friends we met up with informed us that this sign was iconic of Osaka, and represented where the center of the old town stood. They also told us it was customary for visitors to come and take a picture with the sign, imitating his position, so of course I did 🙂

Well, there you have it – some of my favorite pictures from my incredible trip to Japan! As I’m working on my photography skills, I know my photos did not truly capture the beauty the country has to offer, but I tried 🙂 Let me know which picture is your favorite!

28 thoughts on “Photo Essay of Japan”

I know I’m guilty of this: basically going the e

Two of my biggest pet peeves: being interrupted an