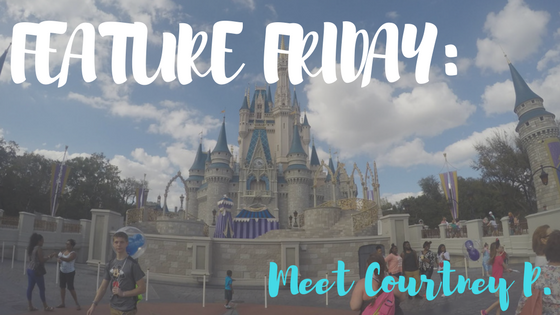 Orlando, Florida is home to the oh-so-famous theme park, Disney World.  Known as a haven for children and adult alike, there are so many experiences to be had at this amazing park. You don’t need to be a Disney enthusiast to enjoy all that Disney has to offer, but it sure wouldn’t hurt. I’ve known Courtney for about 10 years…give or take, and I have yet to find someone else who has such an affinity for Disney. Don’t get me wrong. I love Disney as much as the next guy, but her love for Disney is on a whole different level..a level I believe that can be shared by Disney employees.  It may look like all fun and games, but do we ever stop to think about all the hard work the employees have to do? Let’s find out what Courtney has to say about working at Disney!

Thank you for participating in Feature Friday. Can you tell us a little bit about yourself and how you got interested in the working aspect of Disney?

My name is Courtney, I’m 24 years old from Georgia. I got interested in working for Disney when one of my best friends Melissa participated in the Disney College Program (DCP) our sophomore year of college. Melissa is one of my closest friends from high school and we have always shared our love for Disney with each other, I actually think that’s how we became friends in the first place. She told me about everything she did and all the benefits, free access into the parks 😉 and I knew I had to do it. The only problem was I knew I was going to have to wait for my swimming scholarship to expire/finish swimming before I would be able to apply. So during my final semester of college I applied, knowing this was the only shot I was going to be able to get. I was accepted to be a lifeguard at Typhoon Lagoon Water Park, then halfway through and to change to food and beverage at All-Star Music Resort. Now, however, I am participating in a professional internship working as a Wilderness Explorer at Disney’s Animal Kingdom (think of Russell from the movie Up and that’s me).

What do you think most people believe it’s like working at Disney?

What did you initially think it was going to be like working at Disney?

Well, I knew a lot since Melissa did the DCP before and told me everything. I knew that I could be working extremely late shifts and not be making a ton of money. I thought that I would be easy to give away shifts so you could go into the parks when you needed to if you had friends or family visiting. I also thought I would make a ton of friends during the DCP from all across the world. I was also looking forward to making magical moments for guest everyday.

If you are doing the DCP, you are at the BOTTOM of the food chain so you will get put in the closing shift and possibly have to work till 4 o’clock in the morning depending on your roles and location. I was very fortunate as a lifeguard at Typhoon that my latest shift ended at 5:30, unless I was one of the very few that got to work special surfing events that might have caused me to stay later but those were rare. Then when I got moved to the resorts I was in for a very rude awakening when my first week of training I soon realized I would be working till 1 o’clock in the morning. Also you do not get a ton of money. It’s higher than minimum wage, but it’s still not a lot, especially for living at Disney. Yes, we do get discounts on merchandise and food (at some places) but it’s still not a big amount. The people that I have met at Disney have become some of my closest friends and some live as far away as Australia and New Zealand. All my friends growing up knew my love for Disney, but everyone here understands my love for Disney. Then working here and creating the magic is unlike any job in the world. Everyday, I strive to make a guest happy but it’s those guests that create a magical moment for you that really makes you appreciate your job a little more.

Are there any struggles you face as a Disney employee?
I think the biggest one is just not making a ton of money. Then remembering the “real world,” sometimes I get sucked up into it and forget about my responsibilities that need to be done rather than going to the parks.

What’s the best part of working at Disney?

Definitely the people I work with! I have met so many people in many different areas of this company. If it weren’t for the people I work with, I would most likely be home working somewhere else. I’m seriously the happiest I ever been and 75% of that has to be because of the people I work with. Like I mentioned before, there are some guest that go out of their way to make magical moments for cast members as well. I have been fortunate enough to even receive gifts from a few as well.

Well now working at Animal Kingdom, we are preparing for the opening of a new section of the park, Pandora the World of Avatar. I can’t say much, but it’s going to be amazing! It’s been a lot of fun to be a part of an “opening team” because that doesn’t happen often and very few people get to say that.

Thank you Courtney for being a part of Feature Friday! So happy one of my best friends could contribute to my blog 🙂 Make sure to swing by and visit her at Animal Kingdom if you’re headed to Disney World anytime soon! In the comments, please share if you actually have the pleasure of meeting Courtney! How cool would that be? Also, let us know if you’ve worked at Disney or any other amusement or theme park! What was your experience there? We’d love to hear from you!