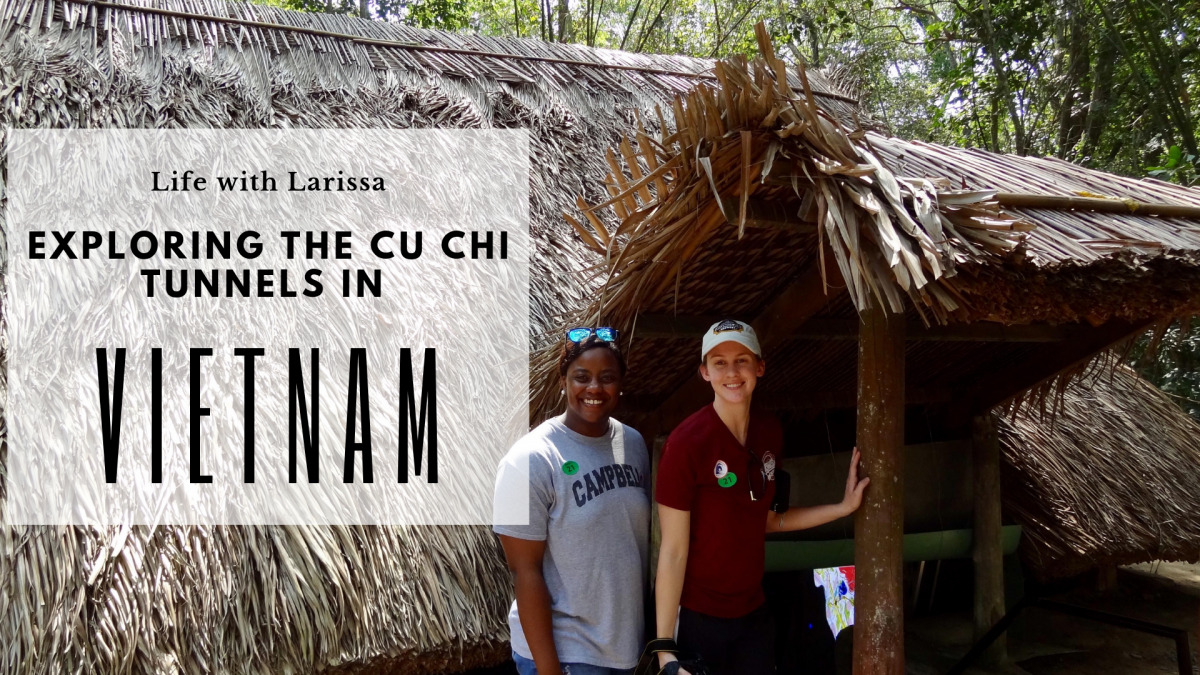 If you would have asked me if I would be visiting Vietnam in my lifetime, I’m sure my answer would be along the lines of “I don’t know…maybe one day.” But life has a funny way of throwing surprises our way – whether good or bad. Thankfully, it was a good surprise to see that Vietnam was on our cruise itinerary. I didn’t know much about Vietnam or the Cu Chi Tunnels before going, but I was excited to see and experience the country with the limited time we had.

Ho Chi Minh City, originally named Saigon, began as a small simple fishing village. Now it is a large bustling city of 8 million people. Although it is not the capital of Vietnam, Ho Chi Minh City is the motorbike capital of the world. With approximately 45 million motorbikes in the country, HCMC claims 8.5 million of those bikes. Literally everywhere you turn, you will see motorbikes carrying packages of all shapes and sizes – and I am not kidding!

The city is filled with a variety of museums, markets, and resorts. Everyone can find something that appeals to them. One of the most popular sites to visit in HCMC is the War Remnants Museum, previously called the Museum of War Crimes. Approximately half a million people go see it each year. Unfortunately, I was not able to see the museum during this trip. One of the best markets in all of Vietnam is located in HCMC – the Ben Thanh Market. Although it has no air conditioning, the market takes up an entire city block and attracts locals and tourists alike.

Fun facts about Vietnam you may or may not know:

I’m not going to lie: I didn’t know much about the Vietnam War, or as they call it in Vietnam – the American War, before going to Vietnam. I don’t think we covered it much in our history classes, but even so – I didn’t have a clear recollection of the Cu Chi Tunnels.

The Cu Chi Tunnels were originally constructed in the 1940s, during World War II. In the 1960s, during the Vietnam War, the Vietnamese began expanding the tunnels. They made a home for themselves underground, including a rudimentary hospital. These tunnels became a giant network throughout the country, serving as a home base, bomb shelters, and so much more. The Cu Chi Tunnels played a great role in the Vietnamese victory.

The tunnels were built purposefully small, so therefore, only Vietnamese would be able to travel though them. Foreign invaders tended to be larger than their Vietnamese counterparts, which would prevent them from moving very far within the tunnels – if they could even find them that is.

The tunnels were skillfully and expertly hidden. Perfectly designed to camouflage with the surrounding environment, it was nearly impossible for foreigners to find the entrances/exits to the tunnels. The Vietnamese also employed the use of traps, creating spaces that looked like an entrance to a tunnel. Instead, soldiers found themselves injured from the various traps. The Vietnamese purposefully built their traps to only injure, and not to kill. The mindset was that it would take two other soldiers to carry the injured back, therefore decreasing the numbers of their enemy.

It was truly incredible to experience the Cu Chi Tunnels. We were able to see the trap doors, the various rooms they had underground, and we were even able to walk through two short segments of the tunnels.

Although history isn’t necessarily my thing, I was captivated from start to finish. I think if you’re ever in the area, a visit to the Cu Chi Tunnels is a must! Have you ever been to the Cu Chi Tunnels? Or did you learn about them in your history class? I’d love to hear your thoughts!

2 thoughts on “Exploring the Cu Chi Tunnels in Vietnam”