My trip to Hawaii was incredible. Come find out how we spent our time in the beautiful island! 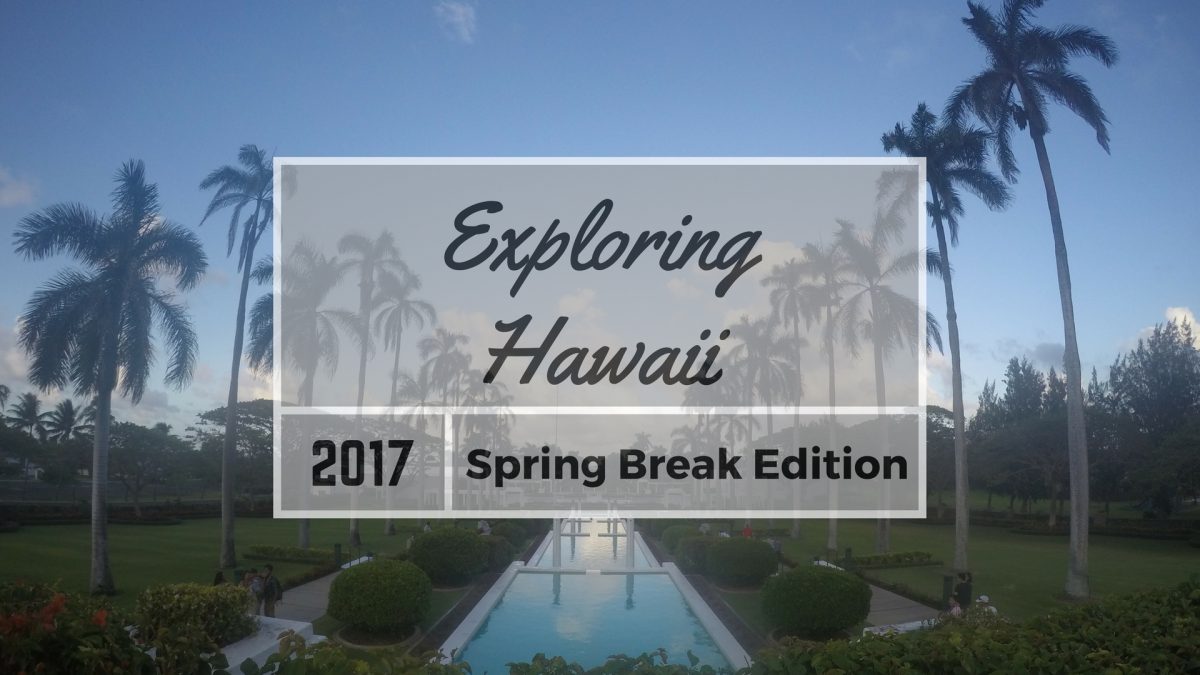 When I think of Hawaii, images of sand, surf, and sun pop into my head; and the island did not disappoint! Surreal doesn’t even begin to describe how I feel when I think about the fact that I actually visited the 50th state. Hawaii is made up of several islands, and if you’ve been keeping up with my posts, you’ll know that my sister, Brit, and I visited the island of Oahu.

The night we landed, my friends K & T took a bus and met us at the airport. Thanks to them, we got lei’ed and I was truly excited about that. I didn’t realize they used real flowers! We walked a little bit away from the airport and caught an Uber to a cozy cafe known as The Pancake House to the locals. This is where I was introduced to coconut syrup for my pancakes. It was really thick, but oh so good! We spent the night in Honolulu with K & T, because we had to pick up our rental car the next day.

So our first full day in Oahu, I of course forget to grab my camera on the way out the door! K had to go to work, so we made plans to meet up with her for lunch. T, Brit, and I headed to the Ala Moana Center to check it out. It’s one of the biggest malls I’ve ever been to. We even got lost a few times. After hanging there for a bit, we caught the bus to the business district of downtown Honolulu to meet up with K for lunch. We decided on this Asian restaurant that specializes in Udon. Udon is a really thick noodle that can be eaten hot or cold. It’s served in a broth, paired with a meat and/or a salad. This might arguably be one of the best things that I ate the entire trip!

Afterwards, K had to go back to work, and it was time for us to pick up the rental car. So T helped us find the bus that would bring us there, and we made it to the rental place. For some reason, still unbeknownst to me, the lady at the counter upgraded us for free. She said the car we currently had just wouldn’t work for us. I didn’t argue. She seemed to know what she was talking about!

Tip: Just a heads up if you’re planning on renting a car, they are not cheap at all, ESPECIALLY if you’re under 25. Who knew my birth year would cost me money?! With much research and booking the car in advance, you can cut some costs!

We swung by our friend’s

apartment, grabbed our stuff, and headed to chill at Wakiki Beach. We were staying in Ewa Beach with K’s parents because they had more space. They weren’t home yet, so we had some time to chill. I’d loved seeing all the people out enjoying the nice weather, and the beach. Finding parking was a little hard, but we finally found a spot. We stayed there for about an hour or so, before heading over to Ewa Beach.

Tip: Parking at Wakiki is free after 6:00pm. I also believe the parallel parking side is free, but those slots are super hard to get. If you park on the other side before 6:00pm, make sure to bring quarters for the meters.

The next day was dedicated to the Polynesian Cultural Center. We drove up the North

Shore, and even though the drive seemed long, the scenery made it worthwhile! Experiencing the PCC was incredible! Aotearoa. Fiji. Hawaii. Samoa. Tahiti. Tongo. These are the islands that this park centers itself around, teaching its guests about the culture of the islands. You have the option to have a guided tour, or to tour yourself. We chose self-guided, and it’s really a lot to take in. Each island has a demonstration and activities that you can engage in. We even participated in the spear throwing of Tongo. For dinner, we attended

the Ohana Luau, complete with a roasted pig, and other delicacies specific to Hawaii. We even got lei’ed a second time! Not only did we enjoy dinner, but we also had a beautiful show out on by the dancers while we ate. Throughout the day and the free tram tour to the surrounding area, we learned that a lot of the employees and dancers are actually students at the Brigham Young University-Hawaii. I thought that was pretty interesting! At the end of the day, the best part happens. You sit in this massive arena and watch a story get told through dance and a narrator. It’s truly a work of art that captivated me from the very beginning! It ends rather late, but it’s so worth it!

Tip: If you’re using the Go Oahu City Card, you can choose the PCC as your one premium attraction, and it includes the night show.

The following day, we were scheduled to take a catamaran tour. This was also included

in our Go Oahu City Card. We received a free drink token redeemable for any one drink, alcoholic or non. The tour was super relaxing and we received a different view of the island. Truly beautiful. We spotted one turtle and lots of flying fish. I had never seen flying fish before, and they look like little miniature birds. Afterwards, we rushed over to check out Queen Emma’s Palace. We arrived just before closing, and we learned a lot about Hawaii’s history. One fact that I found interesting was that Queen Emma was responsible for the public

hospital located on the island. To this day, it holds her name. She also has a street named after her in downtown Honolulu. She is known as one of the most influential people of Hawaii. After our tour, we check out the Pali Lookout, and the views were amazing! We met up with K & T for dinner at the Farmer’s Market downtown, in which we all split various crepes. It was delicious.

The next day, I almost

died. Haha…I’m just being dramatic. We hiked up the Pillbox, and I am NOT a hiker. My calves were burning. My lungs were screaming. My anxiety was creeping in (I’m not a big fan of heights). Through all that though, with the encouragement of my friends, we made it to the top, and the view was breathtaking. I’m glad I went through all that pain to gaze upon such natural beauty. The hike back down was stressful as well. I was so nervous I was going to slip and just end up sliding down the rest of the way. Thankfully, every time I did slip, I was able to catch myself! After the hike, we headed over to Waimea Bay Beach. Now I’ve

been to my fair share of beaches in various locations around the world: Florida, Georgia, South Carolina, North Carolina, and France. I thought I had beaches under control. Boy was I wrong. Waimea Bay literally beat me up. The waves were so strong, and they crashed literally right on the shore. I had never experienced anything like it before. I ended up with some small cuts and bruises, and a lot of sand in a lot of places, especially in my hair. Thankfully it’s an experience that I can look back and laugh at!

Tip: Check out my vlog to see first-hand footage of my sister getting pummeled by the waves! Trust me, it’s funny!

After our encounter with the waves,

we drove across the island to visit the U.S.S. Arizona Memorial. You have to get tickets in advance, as they sell out pretty quickly. Of course I had learned about Pearl Harbor in school, but it’s completely different learning about it at the site. Before you are ferried over to the Memorial, you sit through a short televised presentation giving background on the attack, and I got chills watching it. In the Memorial, they have a wall filled with the names of those who lost their lives. They also have a small section filled with names who survived the attack, but when they passed, came to be buried with their fellow brothers of the ship.

Our last full day on the island was amazing, thanks to K & T’s planning! We dedicated the

whole day to exploring the West Side. We started at Electric Beach. I had heard incredible snorkeling stories from this beach, so I was pretty excited. Thanks to the amazing lifeguards who pointed out turtles and helped pull us further out, we were able to see various types of fish and get up close & personal with a sea turtle. After that, we headed over to explore some mermaid caves! That was really cool! Only K & I went down into them. I bumped my body a few times on the surrounding rocks as the current flowing in and out of the caves is pretty strong. To

end the day, we ended to the very end of the West Side to Ka’ena Point and hung out the rest of the day. It was a great way to end our stay in Hawaii.

Our last day, we headed over to check out the Honolulu Museum of Art. It just so

happened to be their 90th birthday, so there was free admission for everyone. The artwork displayed was truly unique! They even had a variation of Stitch in the museum, which I thought was the coolest thing ever, because who doesn’t love the Disney movie ‘Lilo & Stitch’?! We met up with K & T later that day, and we went to a Jolyn trunk show, my first ever! Jolyn is a brand that specializes in swim suits for women. Afterwards, we dropped off K & T at their apartment, and we parted ways. We drove our car back to the rental place and hitched a ride on their shuttle to the airport.

Tip: For the art museum, there are two parking lots. One is a paid lot, and the other is free on weekends and during certain hours.

At first, I didn’t think we did much at all, and I felt as if we had lost precious time; however, as we began to recount all the activities and exploring we did, I realized just how much we covered. We basically toured the entire island. Honolulu. North Shore. West Side. Yep, we covered it. Hiking. Snorkeling. Museum-ing. Yep, we did it. I am truly grateful to have had the opportunity to explore Hawaii. Hopefully one day, I’ll go back and visit the other islands!

If you’d like to see the vlog I put together from our trip, click here! Let me know what you think!

Remember when I told you guys I was having water w