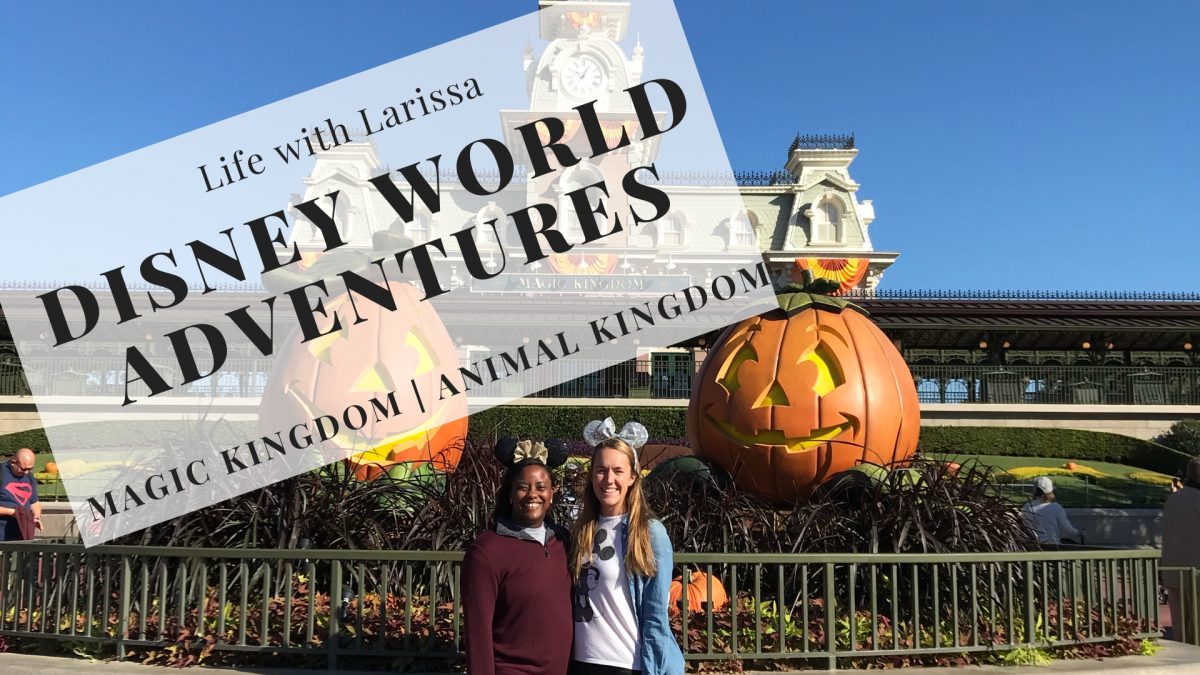 Is there anything more magical than starting your day off at the happiest place on Earth? Okay, if we’re being honest – maybe waking up in Bora Bora, or the Maldives. But I think Disney World is pretty up there as well! I flew down to Orlando SUPER early morning, where one of my best friends came to pick me up. We headed to a delicious breakfast spot, then made our way Disney! As you may [or may not] know, Disney World is composed of four different parks: Magic Kingdom; Animal Kingdom; Epcot; and Hollywood Studios. We spent the day experiencing the first two – Magic Kingdom and Animal Kingdom!

Although I’ve been to Disney before, this was my first time visiting during a seasonal occurrence, and I was pretty excited to see all the fall decorations. Honestly, you would have thought that I had never been to Disney. We rode the boat over and while getting off, I was bouncing on the soles of my feet, so excited to see the decorations!

Magic Kingdom offers a variety of rides, shows, and parades, but below you will find the ones that we did:

This interactive ride provides you an opportunity to help out Buzz Lightyear defeat Zurg. You aim towards the Zs throughout the ride, trying to hit each and every one. If you’re phenomenal like Courtney, you’ll get to the point where your score can’t get any higher! If you’re like me, you’ll need a lot more practice before you get to that point!

This festival is my favorite that I’ve seen at Disney [I haven’t seen many]. I love the music, the characters, and the fun had by all when this parade passes. People begin lining up well before the parade starts to secure a good viewing spot, and some of the dancers/characters even engage and interact with the audience. If you haven’t had a chance to see this parade yet, I highly recommend!

Haunted Mansion – What more perfect to explore during fall season and around Halloween than the Haunted Mansion? You get trapped in a room and the only way to get out is to go through the haunted house.

Monsters, Inc. Laugh Floor – This interactive show had me laughing so hard. I wasn’t entirely sure what I was getting myself into when we walked through the doors, but I was super happy we went. Even if you’re not a sucker for corny jokes [like I am], I really think you will enjoy yourself!

People Mover – The People Mover takes you through Tomorrowland, explaining various rides and the vision Disney had for the parks. It’s a great way to gain a deeper understanding of the parks, and also a perfect way to relax and get off your feet for a bit.

Pirates of the Caribbean – Go through the adventurous journey of the pirates on this ride. You see various pirates and ships, and feel as if you’re immersed in the pirate world!

Winnie the Pooh –  Hop aboard a barrel of honey and venture though the pages of the Winnie the Pooh story. One of my favorites parts of the ride actually includes the line. You will see the fence is composed of trees from the book and their is an interactive honey wall where people can draw!

Under the Sea – This ride takes you on the adventure of the Little Mermaid. You travel under the sea on a clam shell and you re-live the moments Ariel experienced. It’s a cute ride!

After Magic Kingdom, we made our way to Animal Kingdom! If you kept up with my Instagram stories during my trip, you’ll know this is where Courtney works! If you’re ever there, make sure to stop by Guest Relations and say hi 🙂 Animal Kingdom is filled with so many different and wonderful adventures!

Avatar Flight of Passage – This simulator ride is incredible. You get to ride through the land of Pandora on the back of a banshee, and it really feels like you’re there. You feel the wind, you hear the noises, and you see the sights. You can even feel the banshee breathing while you’re sitting on him/her. It’s one of the coolest experiences ever!

Festival of the Lion King –

This is my ALL-TIME favorite show in all the Disney parks. If you are a fan of The Lion King, and even if you aren’t, please check out this show. The characters and dancers are simply amazing. You see amazingly talented people perform, and it’s truly something I could never get tired of.

It’s Tough to be a Bug – This 4-D show is neat because although many people do not like bugs [me included], it shows the importance of various bugs while engaging you in a funny show. Throughout the show, you’ll be able to see, feel, hear, and smell the different elements!

I’ve never been on a safari, but embarking on the Kilimanjaro Safari really makes me feel as if I’ve travelled to some far away land to see these beautiful creatures in their natural habitats. We saw antelope, gazelles, rhinos, elephants, giraffes, flamingos, anteaters, lions, cheetahs, alligators, and so much more!

Na’vi River Journey – As part of the Pandora experience, the River Journey offers a different opportunity. You board a boat and float through a bioluminescent rainforest and are able to see the various plants and animals Pandora holds.

As the park closes, a light show plays across the Tree of Life. If you look closely, you can see various movies being shown in their key colors. This was the first time that I had seen it [I think it’s relatively new], and it’s a beautiful light show.

Courtney was the major reason I had a phenomenal time at Disney. I was able to spend time with one of my best friends and having fun throughout the parks due to her knowledge. I did a lot of things I had already done before, but at the same time, I experienced a variety of new experiences as well!

Have you been to any of the Disney World parks? Which one is your favorite, and why? If you haven’t been to Disney World, do you want to go? Which park would you like to experience the most? Let me know in the comments!