Are you a space fanatic? Do you love learning about other planets? Come check out my day at the Kennedy Space Center! 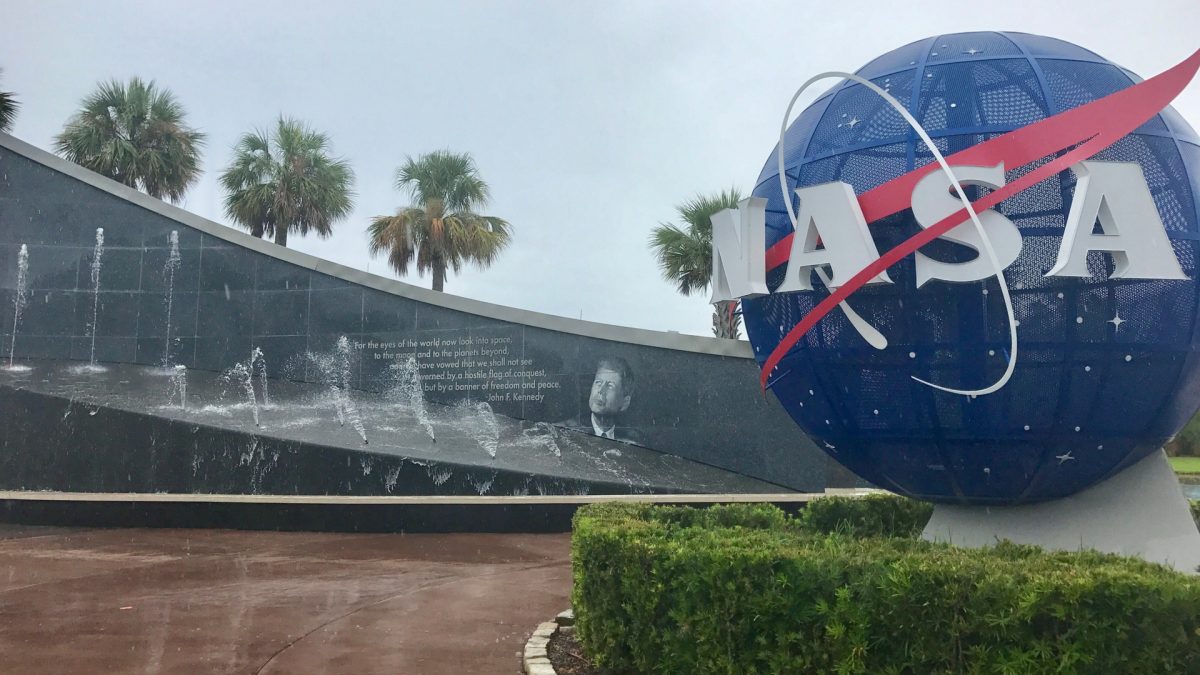 I’m down in Orlando, Florida for about a week visiting my cousin, and taking a vacation before everything starts back up in August. In searching for things we should do, we came across the Kennedy Space Center on GroupOn. We both were curious as to what this attraction had to offer, so we purchased tickets on Sunday morning, and headed about an hour away to Cape Canaveral to explore the Kennedy Space Center.

I’ll be honest – my expectations were high, as I’d only heard and read great things. This is important to note, as it might be part of the reason I feel the way I do.

We arrived to the Space Center around 11:00AM, and parking was super easy. I bought a parking pass online for $10, and I just had to show the ticket on my phone to gain entrance. We parked relatively close to the entrance, although I wouldn’t say any of the parking spaces are really that far away from the entrance.

TIP: My recommendation would be to arrive right at opening at 9:00AM, so you have time to get everything done by 7:00PM, which is closing.

Since we had already bought our tickets online, we bypassed the tickets line, and we veered left following the sign that said ‘Plan Your Day’. In the information center, they have a desk where employees will answer any questions you may have, maps of the center, and merchandise to buy. The most exciting thing though was the computers that helped you plan out your day depending on the type of ticket you purchased. It was great to have at our disposable, especially since it was our first time there. Another great feature was when you were done, you had the option to print your customized itinerary right then and there, or email it to yourself. It’s definitely convenient in planning how to maximize your time for the day.

TIP: When planning out your day, take into account wait times and travel times to the different location. That will impact what all you are able to do.

We started our day at Journey To Mars: Explorers Wanted. Before or after the show, you will have the opportunity to read up on Mars, and see some of the actual rovers that roamed the planets surface. You’ll also be able to play some mini-game to help land a rocket on Mars. It’s confusing at first, but once you figure out what you’re supposed to do, it’s fun. The show is conducted by a NASA employee who delves more into what we know about Mars, and shows more footage that has been captured from rovers. It’s pretty neat!

After this, we headed over to check out Space Shuttle Atlantis. We watched two separate videos about Atlantis, and the process of getting the shuttle from idea to man-made reality. I never really thought about how much work goes into building a shuttle, or preparing the astronauts for the journey. After the videos, you enter a massive room of which Atlantis is hung before you. Here, we learned more about shuttles and there were even interactive games for us to engage. As we continued walking, we came across the Shuttle Launch Experience, which is a simulator giving the experience of an astronaut launching into space. That was pretty cool to do, and before you get on the ride, they take your picture and photoshop you into a NASA space suit in case you want to buy it after. We didn’t buy ours.

Afterwards, we headed to catch the Bus Tour to the Apollo/Saturn V Center. The bus tour itself is about 45 minutes, and they take you to see the various launch sites. Once we arrived at the center, we watched a short presentation about Apollo, and we even got to see the original control room from which they interacted with the shuttle! When we finished watching that video, we entered a large room containing other rooms and various attractions. One of the rooms had the evolution of spacesuits. That was pretty neat!

We saw different types of moon rocks, and we even got to touch one. The one we were able to touch was definitely not what we where expecting. It was a sliver from a larger moon rock, and it was black, shiny, and smooth. We also got to see Snoopy as an astronaut. We explored a little bit more, but time was flying by and we still hadn’t done everything back at the main location. So we hopped back on the bus, and headed back to the Space Center.

When we got back, we watched the Journey to Space 3D in the IMAX theatre. I believe there’s a place for people to buy popcorn to enjoy during the movie, but as we were running late to the show, we weren’t able to check. I just saw some popcorn on the floor, which is what makes me think that’s the case. This mini-movie covers past and future projects by NASA. It also addresses the reasons why we are spending so much time in space, which JoJo greatly appreciated. It’s a pretty lengthy show, but it’s very informational.

My favorite attraction was Science on a Sphere – Live. We had the pleasure of having Kurt as our presenter. He was so funny [I’m a sucker for corny jokes]; he was very knowledgeable; and he obviously had a deep passion for space exploration. This globe was suspended in the air, and he would use it in the demonstration. The pictures would change, and the images would be from what satellites or rovers have captured. That was pretty cool to see. We learned about the different planets, and various moons. We also learned that the satellite revolving around Saturn is running out of fuel, and will finish its mission in September. In an attempt to gain more information about the planet, they plan to use that last little fuel to break into the atmosphere. That is something that has never been done before!

We ended our day at the center with the Rocket Garden. Unfortunately, we didn’t explore it much as it was raining, and it was only picking up momentum. As it was almost time for the center to close, we wanted to head out before the rain got worse.

When we got home, we were still on the space kick and my cousin recommended we watch Hidden Figures. This movie is based on a true story that follows three young African-American females who work for NASA in the 1960s, and contribute life-altering work to this organization. There could not have been a more perfect ending to the day. Some of the things mentioned, or seen, in the movie, we had learned about at the center. It was cool to be able to pull those two together. And the movie itself is phenomenal…I highly recommend it!

Although I do not regret going to the Kennedy Space Center, I don’t think that I’ll be back. It was great to learn more about space, but I wish it was more interactive and engaging. I’m more of a hands-on person, and I thought there would be more of that. I’m glad I had the opportunity to go, and my recommendation would be if you’re interested in space, check out the Kennedy Space Center! If you’re not that interested in space, maybe this isn’t the place for you!

What about you? Have you been to the Kennedy Space Center? How was your experience? Let me know in the comments 🙂

18 thoughts on “A Day at the Kennedy Space Center”